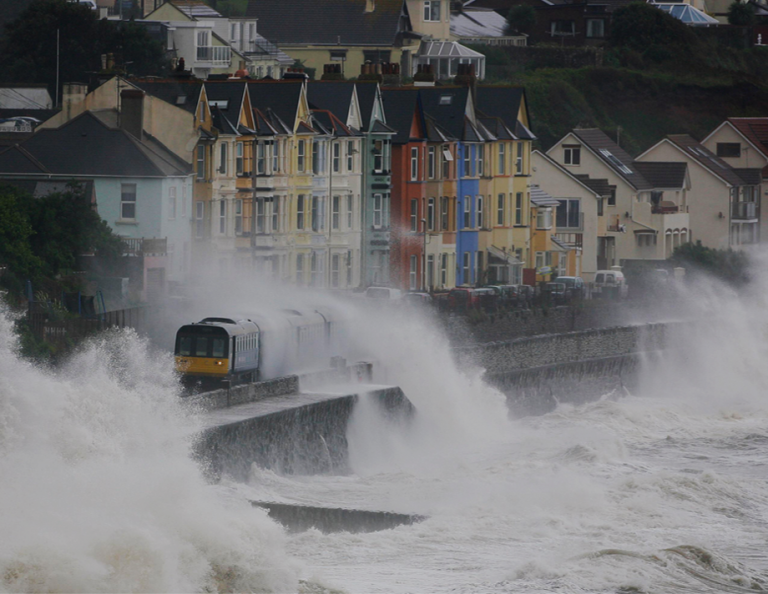 What does climate change mean for existing infrastructure assets?

Infrastructure assets are designed to operate over the long term.  The vulnerability of these assets due to age and deterioration is now being further jeopardised by climate change, which has become a topic of debate and research among engineers and policy makers.

Bridges, with an average design life of around 120 years, are one of the most relevant elements when considering the effects of climate change. Typically, they have been designed on the assumption that the climate of the future is very similar to our current one.

We can of course start to include the effects of climate change as we plan and design new infrastructure, but what about existing infrastructure that has already been built?

Let’s start our brief globe-trotting trip by looking at the impact on America. According to the 2020 Global Climate Report from NOAA National Center for Environmental Information covering a state-wide review of the US, “every month of 2020 except December was in the top four warmest on record for that month.”

As well as its warmer climes, America is feeling the financial impact on its federal resources and taxes which, as a consequence, has left many of the country’s bridges in a precarious position.  A report published in 2019 noted that the integrity of many US bridges relied on regular and efficient maintenance to keep the expansion joints functional in order “to avoid undesirable thermal demands that would potentially be magnified due to climate change”. The report’s findings stressed the need to develop new materials and technologies that would prove both cost-effective and sufficiency flexible to enhance the resilience of the transport infrastructure.

In Scandinavia, the degradation of its infrastructure has started to accelerate due to its shorter, milder winters and longer, hotter summers.  Sweden’s projected higher temperatures, increased rainfall and humidity, allied with higher carbon concentrations in the atmosphere, has led to an increased risk in the deterioration of its bridges.  A recent report on carbonation induced corrosion predicted a rise of more than 400% by the year 2100, citing climate change as the principal cause and stating that similar trends could be expected regarding steel bridges.

As well as the problems of increasing temperatures and more unpredictable rainfall, into the mix comes the heightened intensity and frequency of extreme weather events. Flooding is of particular concern, with shorter return periods and simulations predicting that some bridges may be totally submerged in the not too distant future.

More intense and frequent rainfall can change river flow conditions and increase the risk of scour damage to bridge piers. One of the primary causes of bridge failure worldwide, scour damage occurs when fast-moving water removes sediment from around the bridge foundation, leaving behind scour holes which, in turn, can seriously compromise the bridge’s integrity. If too much sediment is washed away, the bridge may collapse.

Published in 2017, the UK Climate Change Risk Assessment identified “Risks to transport networks from slope and embankment failure” (due to heavier and prolonged rainfall) as needing urgent action, specifically “to locate and remediate embankments and cuttings at risk of failure”, and identified that “approximately 8% of the UK’s transport and road network is at medium to high risk of landslide disruption.”

Add to this the effect of high winds on bridge stability and high temperatures that can result in operational downtime due to rail tracks overheating and even buckling, and it becomes clear how significantly climate change can increase the risk of structural and operational failure of infrastructure assets.

The consequences for asset owners are wide-ranging, from complete or partial structural failure, the considerable cost of repairs, increased insurance premiums and operational failure, to asset downtime and, in the case of the rail network, service disruption.

It also raises concerns over health and safety issues and, in broader terms, erodes public trust and impacts on reputation.

The value of smarter asset monitoring to offer an effective strategy to combat climate change issues lies in its ability to help asset owners, or those working on their behalf, to better understand the actual loads and conditions being experienced through the lifecycle of an asset.

The smart use of in-situ sensors and satellite data allows us to identify vulnerabilities early on, making the risks easier to evaluate and alerting asset owners to any potential crisis points long in advance. This enables them to undertake preventative maintenance, strengthening works, or adjust operational schedules, prior to a failure occurring.

As weather patterns become increasingly complex, we can build forecasting tools that model the impact of any scenario on site, from rainfall and windspeed to temperature and humidity. So, for example, what happens if next month’s rainfall is 15% above average? Or if the temperature drops below 15 degrees? With the click of a button, the data can be analysed and acted upon.  The days of the TV Weatherperson may be numbered!

As the threat of climate change grows and these risks increase, we need more awareness and insight so that asset owners can better protect their infrastructure, and society – saving money, time and lives.

Get in touch
Previous All news Next
ALL