Following significant issues with this particular bridge, a routine of additional monitoring had been put in place. On this particular bridge, acoustic sensors were installed which were able to collect evidence of periodic wire breaks within the structure. This led to the implementation of a programme of measurement of the tension of the tendons in the legs which identified significant changes leading to concern about the structural integrity of this key transport asset.

Having made these discoveries a Total Station was used to measure displacements of the bridge deck. The readings did show some downward movement, however it wasn’t clear if this was an accelerating problem, or simply the bridge’s seasonal response to temperature changes as there simply wasn’t sufficient data. It was imperative to determine whether the bridge needed to immediately be closed for public safety, or if there was time to investigate further.

Closing the bridge would cause huge disruption with very significant costs going forward. The problem for engineers is that the observed issues could be a result of any combination of temperature, long term creep, transient live loads, construction activities and structural deterioration. Without an understanding of how the bridge was behaving historically, it was difficult to determine whether the movements were within the range of what was expected, or a cause for genuine alarm.

In addition to the factors we traditionally expect to impact structures like this, climate change is now adding strain to the condition and structural health of assets, making assessing their condition increasingly important.

The key thing engineers needed was more data. The only solution on the market today is the historical data available from Satellites, specifically, InSAR. That data stretches back 5 years and is capable of identifying millimetre changes in vertical displacement.

BKwai’s advanced data techniques help engineers to analyse the displacement trends and establish the “normal” range of movement caused by seasonal temperature changes across various locations on the bridge. By bringing in environmental data, the correlation with temperature could be seen. This gave the engineers managing the structure an understanding of how the bridge and the ground around the bridge have been behaving for the last five years and on an ongoing basis as new data continues to be fed in.

In addition, the manual survey data from the Total Stations is being loaded into the same platform, allowing the team to easily visualise and interrogate that data and also compare it with the satellite data. 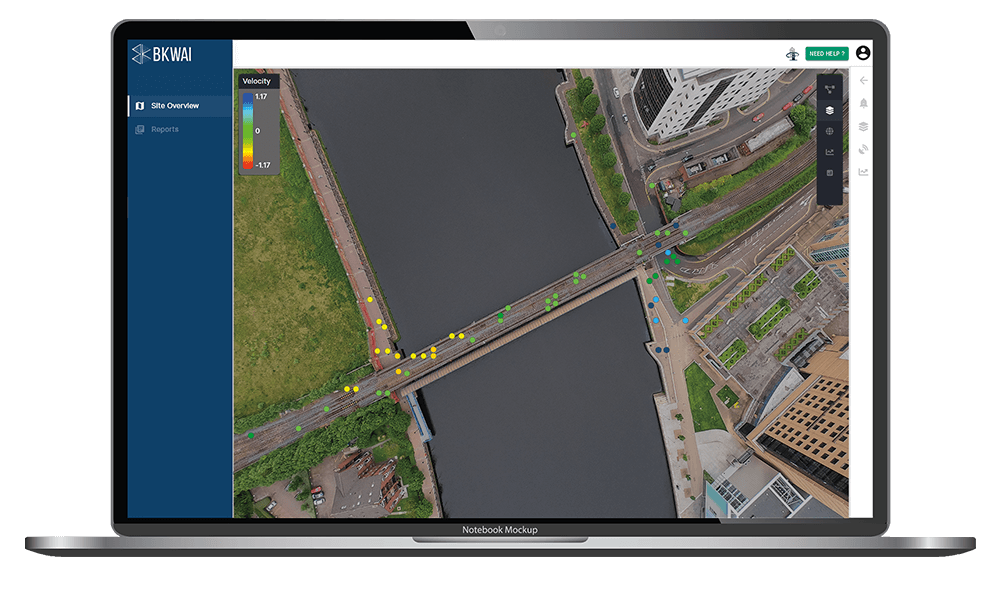 Engineers were able to determine that, at this stage, it was safe for the bridge to remain open so traffic could keep moving. They are continuing to investigate the causes for the change in tension but are now comfortable that there is no need to take urgent action.

The ongoing use of the BKwai platform, with up-to-date Satellite data, allows them to continue monitoring the bridge for potential changes in movement while the investigation is completed.

With the BKwai platform for construction monitorting, the contractor is able to:

“We were concerned about material testing results for the bridge and considered the need to close the structure to traffic when traditional monitoring equipment showed vertical displacements of the deck over a short period of time. BKwai was unique in enabling us to review the historic behaviour of the structure and gave us the confidence that these movements were likely due to seasonal thermal movements. The class-leading platform enabled new insights into the performance of the bridge and is continuing to provide invaluable information for our ongoing management of the structure.

Ultimately, BKwai provides crucial information for our CS470 reviews of the structure and gives us the confidence to keep the structure in use avoiding huge disruption to the road network. The team are a pleasure to work with, and the platform is continually being improved with powerful new features that will be indispensable as we continue to increase our understanding of the structure.”